Megali Panagia
A Macedonian embrace in the heart of the forest! Megali Panagia is a typical Greek mountainious village, full of tiled houses, cobbled streets and mansions, streams trickling through man-made springs, centuries-old arched bridges, green landscapes full of the scents and colours of the earth…… 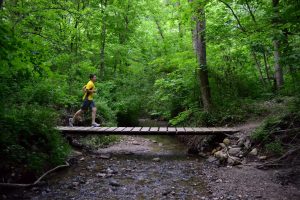 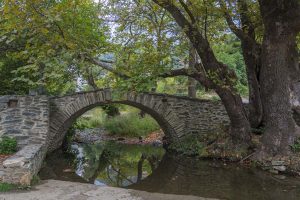 It is one of the largest and most important settlements of the Municipality of Aristotle, known for the Great Pilgrimage of Virgin Mary, the reason why many people come here every year. It is built at the foot of the hill named “Chtikela”. It is located 80km from Thessaloniki. The village was named Revenikia and its current name was given in 1928. It is one of the oldest and most traditional in Halkidiki and is often referred to in byzantine documents of Mount Athos – in fact, there is a reference to “kastelion of Aravenikaia” and to a tower in a 1349 document. During the Ottoman years it was one of the greatest Mademochoria. 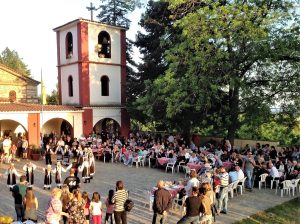 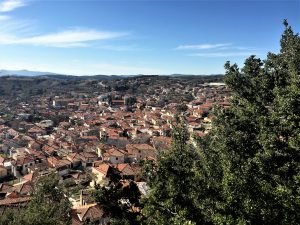 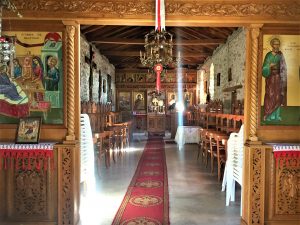 Three rivers used to run through Megali Panagia but only one is visible nowadays. A restored, arched, thousand year old, bridge, made of stone, still stands beside the asphalt road. Residents cultivate olive trees and they are also involved with animal breeding, wine & tsipouro production, agricultural tourism and logging. In the old days there were many good builders who worked in Mount Athos, and many weavers.

Info:
It is worth seeing the temple of St. Vasilios (1955) and “Panagouda”, a church which -according to tradition- was built in 1007 on the highest spot of Megali Panagia. It is dedicated to The Assumption of Virgin Mary and celebrates on September 8.

Tips:
* Megali Panagia is an ultimate pilgrimage destination. It welcomes thousands of pilgrims each Assumption, who honour the miraculous image of the Virgin Mary, or Panagia in Greek, the patroness of the entire area. Visit it during 15th of August and celebrate with the locals!
* Organize weekend holidays from early October to Christmas. The preparation of tsipouro production and the celebrations in the local “tsipourokazana” are the most authentic tourist experience you have ever had!