It is really rare, so many ancient sites and monuments neighbouring each other, existing in an area, where the historical data compose such a rare and of high importance route.

Eastern halkidiki presents its history through its ancient sites, the monuments and its museums:

Visit them at every opportunity, following the existing archaeological routes, or even by creating your own!

The Hellenistic city of Stageira

It is for sure the most beautiful place that you have ever seen!

Built on the verdant peninsula “Liotopi”, 500meters southeast of Olympiada, and occupies the two hills of the small peninsula.

The location of the city, which is the birthland of Aristoteles, the view is majestic: overlooks the endless, the pristine beaches of Olympiada, being one of the most historically important archaeological sites of Greece. 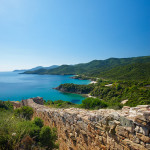 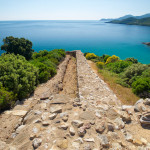 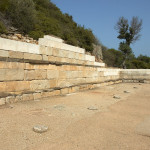 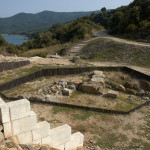 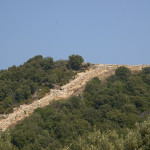 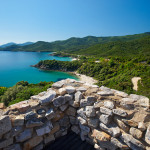 The city was founded around 655 BC by Iones colonists of Andros island, and little later arrived also settlers from Halkida. After the Persian wars, Stagira was a member of the Athenian Alliance, contributing this way to the common fund. During the Peloponnesian War, and concreter in 424 BC, the city was deserted by the Athenians and allied with the Spartans. The event angered the Athenians who rushed to siege the city, but without managing. Later Stagira joined the Public of Halkida. In 349 BC the city was besieged and later yielded to Macedonia’s king Philip II, who devastated it, to found it again from the beginning some years later, in order to honor Aristotle. It seems though that this destruction marked the start of the city’s decline. For this reason geographer Stravon, who lived at the time of Jesus Christ, noted that Stageira was deserted.

Dare to wander around the archaeological paths in the verdurous nature, seeing all the findings on both hills, and- if it is summer- finish the visit with a swim at the beaches around. Indeed it is about a unique experience!

It is about the excavation of the former Mount Athos, Zigou Monastery, located 40m away from the nowadays borderline of Mount Athos- known as the unique monastery which can be visited by women as well.

The first mention of “Zigou” on the Athos peninsula comes from a document of 1942. In 958, St Athanasios, the later founder of Megistis Lavras Monastery, was initially invited to Zigou, where he started his ascetic life, under the loyalty and the obedience of his Elder. 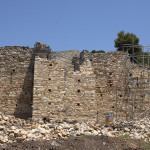 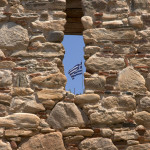 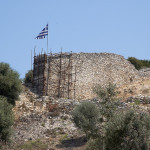 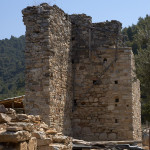 In 991 seems that Zigou Monastery had been already founded, whose first testimony comes only in 996. The monastery was dedicated to Prophet Elias.

Although during 11th century the monastery was one of the most important Athos monasteries, in 1199 was already deserted and given as a metochi from Emperor Alexios III Aggelos, to the re-founded then Hilandariou Monastery. Around 1206, appears to settle in the castle a Frankish ruler with his soldiers, who dashed from there and looting Mount Athos. That was until 1211, when the intervention of Pope of Rome expelled him from the region. For this reason, the ruins of the monastery are also known as “Fragkokastro”.

It is a unique example of big Athos monastery, whose structure can be studied without the barriers of later building phases and devotional use. It is noted that the walled area stretches to 5.5 acres and the walls are fortified with 11 towers. The castle consists of 5 at least building phases, all older to 1211.

From the booklet of 10th Ephorate of Byzantine Antiquities, this will be given to us during your visit to the Monastery.

Women (who cannot visit Mount Athos monasteries) will understand the operation of a Holy Monastery and men will feel the need to carry out a pilgrimage visit to the unique monastic state of the world.

A few meters away from the Monastery are the land borders of Mount Athos. The wall, the Arsanas of Chromitsa monastery, the lush vegetation along the calm waters of the Gulf, will convey you the devoutness of Mount Athos.

Do miss this opportunity!

Ancient Acanthus is located on the northeast side of the Coast, the eastern peninsula of Halkidiki, at today’s location of Ierissos. Thucydides refers to it as Acanthus, and Plutarch as a mixed colony of Andrians and Chalkideans, founded “on the coast of the Dragon”, on the location of a pre-existing culture. According to Eusebius and archaeological data, the possible date of its foundation is 655BC.

Its financial resources were coming from the mineral and the forest wealth, but also from the agricultural and livestock, which were transported from its remarkable port.

The early history is not known. Its development during the Archaic period is reflected from the wide circulation of its currency, starting around in 530 BC, having as an emblem a lion killing a bull. At least 92 types are known. The first historical evidence, from the late of 6th century, relates the city to the Persian wars. As a free city, Acanthus was originally member of the Athenian League and later of the Spartan. In the early of the 4th century BC, a period of great prosperity, the city resisted and never joined the Alliance of Halkidiki. In 348 BC was conquered by the Macedonians, without being destroyed. Later incorporated at the area of Ouranoupoli, a new city founded on the isthmus, between the Gulfs of Strymoniko and Siggitiko, by Alexarchos, brother of Cassander.

According to Livius, around in 200 BC the city was besieged by the Romans, who used the natural sources of wealth and its port. The life of Acanthus continued throughout until the later Byzantine years.

The ancient city extends on a picturesque hillside, 600 meters southeast of the village of Ierissos, where are kept remains of the walls, an impressive part of the citadel, scattered architectural and building remnants of the Hellenistic Period. In the same archaeological site are also preserved ruins of a Byzantine church and two post- Byzantine.

It’s really worthy to spend an afternoon visiting it!

The entrance is free and the surrounding is amazing. The view to the fishing port, the traditional shipyards and the gulf of Ierissos will offer you spectacular icons.

The Sanctuary of Ancient Ouranoupoli

Between the port of Tripiti and the golden beaches of Develiki and Xeropotami are located the findings of the Temple of Ancient Ouranoupoli, which had life from the archaic to the Hellenistic era, a history associated with cities:

At the late of the 6th century, the residents of Sani built the sanctuary outside the city walls. But when Alexarchos founded Ouranoupoli, placed it inside.

Your visit to the Sanctuary of Ancient Ouranoupoli is an archaeological walk in an area of natural beauty along the Gulf of Mount Athos and across the island of Ammouliani.

Do not miss it, it will amaze you!

At the north of Athos area, in the 9th AD century, was developed Sidirokafsia, which took its name by the mineral deposits existed at the area, and from the trading as well, which was intensified since the early years of the Ottoman Rule. 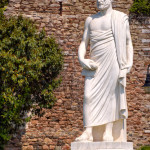 Concreter, the fortress complex of “Sidirokafsia” was built at all heights of today’s settlement of Stageira, which includes parts of the fortification- mostly towers, ruins of houses and workshops, where the mine trading was taking place.

The mines of Sidirokafsia were under the control of the Sultan and were (along with villages) the “League of Mademia”, controlled by the Assembly (Sabor). It is about the 20 famous Mademohoria, headed by the Madem-Aga, who collected annually the contribution of the Great Gate.

Over the years the mines declined, until the revolution of 1821, when Mademohoria participated in the War of Indepedence, suffering though from heavy disasters from the Ottomans. Then the League of Mademia broke down.

Nowadays you will see all these findings into the Park of Aristotle and the hill right across. The local history will pass in front of your eyes, when the proud Mademians were buying their freedom by paying it with the mineral wealth of their land!

On the top of a fort hill, south of Paleohori, it is built a castle, the “Castelli”, the largest of Halkidiki. The only connection to the hill with the mountain is a narrow path. Circled by three sides of a pit, the main tributary of Havrias River, brings plangent sounds of the canyon, coming from a depth of 30-40 meters. Surrounded by a landscape of an outstanding natural beauty and lush vegetation, is “protected” by a wall of length from 800-1000 meters and height of 4 to 5 meters. The castle occupies an area of 15 acres.

The wall seems to have 3 building phases, which are distinguished at its height, and show how many times it had been rebuilt after disasters. Built in the 5th AD century on a location that it was inhabited at least since 1500 BC. The castle was seriously damaged, probably during the 6th century, when it was finally abandoned.

Dare an explorative tour at the Neposi Castle.

You will feel the magic of a real archaeological wandering!