In our museums you will see unusual findings and alternative types of development.

The weaving Museum of Arnea

The entire weaving history, the art and the tradition of Arnea will “parade” in front of you as you visit the Museum of Weaving, in the traditional building, recently restored so as to accommodate the lifestyle of former generations. 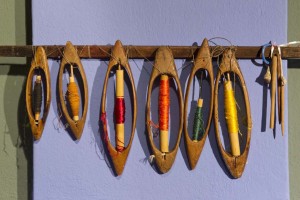 Indeed, the history of handmade carpets in Arnea is lost over the time: patterns classic geometrical, such as the “krikela”, the “Scissor Sun”, and other techniques, which are recorded at the rest of Macedonia and Thrace, such as also “thilota” and the “nail”, where all dominate in the colourful exhibition rooms. Thus, what dominate are the calligraphic carpets of Arnea, which were and still are used to decorate the walls.

In most of them you will see the date that they were made and the name of the weaver who created the carpet. The subjects come from patterns used embroidery, and are influenced by the neoclassicism, depicting “The Chariot of Eos”, “The dance of the muses” but also:

The exhibition is being developed in two levels:

The exhibition also has audio-visual material!

We do suggest you to visit this exhibition. Call 2372050121 or στο 2372050130 and arrange an appointment. Entrance is free and the experience you collect is simply amazing!

The folklore museum of Arnea

A world coming out from a different era, where everything was so simple- simple but so beautiful.

People’s tools, for the mountain and the plains, all the fortune and the efforts of a lifetime, “trapped” with their moments in the renovated stone-built “Archontiko Giatrou”, the famous “Giatradiko”. Somewhere there is set up and the famous loom of Arnea, the one that created the famous carpets- unique samples of folklore art- and the weavers as well, women born to be real laborers and creators.

The cultural center of Ierissos

It is the unique center in North Greece that projects 3d movies.

Of special interest is the movie that shown and presents scenes from the monks’ life in Mount Athos, making the visitors (specially women that are not allowed to entry the monastic state) to feel that walk on the cobble-stoned yards, to be guided in the libraries, admiring the treasures, watching the Divine Liturgy.

The 3D “travelogue to Mount Athos” is available in greek, english, german, russian and bulgarian language. 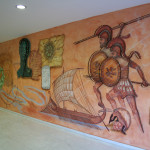 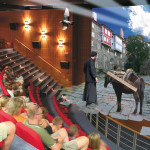 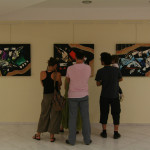 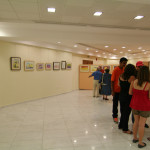 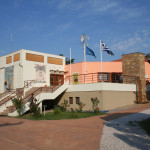 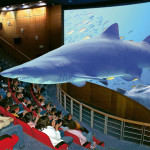 Do not miss to visit and watch this movie: it is a unique one!

Since 1018 AD the tower was belonging to the metohi of Holy Monastery of Vatopedi, named Prosforio. On the east side and attached to the tower, is the barbakas, ie the fortress, belonging to the era of the early Ottoman Rule. At its northwest side is the arsanas (port warehouse) of the tower, built in 1865. At this point there was a dock, which was destroyed. At the semi-basement of arsanas was kept the boat of the metohi, and in the semi upper floor were the warehouses. The upper floor was resided. 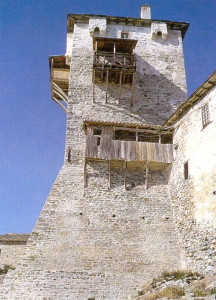 The tower existed since 1344, but it was probably an older one. It was severely damaged by the earthquake of 1585 and later repaired. Probably burned in 1821, after the suppression of Halkidiki’s revolution, but in 1858 it was again repaired with extensive repairs, which gave the tower its current form. Nowadays it has been fully restored from the 10th Ephorate of Byzantine Antiquities and operates as a museum.

The wooden interior of the tower and its roof were built in the 19th century. There were other buildings –warehouses, barns, olive mills, wells- but now there is only the “halkadio” and the “kolligadiko”, located a little farther. In 1924, after the exchange of populations, the tower was settled by the refugees from Minor Asia, and founded Ouranoupoli. During the same period came the Loch couple- Joice and Sydney, of English and Australian origin, as members of humanitarian organisations, so as to provide assistance to the refugees of the First World War. Living in the tower, they offered a substantial assistance to the refugees from Minor Asia and later to the earthquakes victims of 1932. For more than 50 years (Sydney died in 1954 and Joice in 1982) offered great social contribution to the residents of Ouranoupoli. They wrote books and took care of the tower. Joice revived the premises of the Tower by teaching the weaving art to women, making handmade carpets, offering this way to the financial situation of the village.

Nowadays at the tower’s floors are exhibited lots of artifacts coming from the antiquity of Athos area, Ierissos, Varvara, Megali Panagia, Paleochori, and Sidirokafsia. Exhibits of major importance aree the two bronze helmets, of Corinthian type (6th century), and lots of jewels found in ancient Acanthus, Paleokastro, and Megali Panagia. Therefore, visiting the magnificent Tower is essential. Its every window and every balcony give an exceptional view of the surroundings, where the blue of the sea and the mountainous green dominates all over.

The Park of Aristotle

It is located on the hills of Stageira, next to the ruins of Machala, the capital of Mademochoria, and surrounded by a beautiful natural landscape. It has a spectacular panoramic view to the Gulfs of Ierissos and Mount Athos, and as background Athos Mt, who emerges from the Aegean Sea like a proud giant. 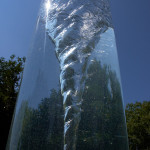 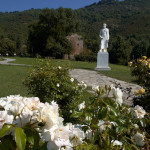 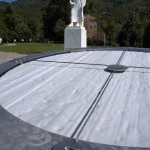 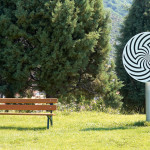 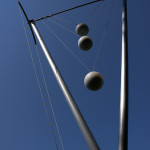 Here you will see the statue of the greatest philosopher of history, of Aristotle, the man who gave birth to Greek philosophy and science in the world!

The physics instruments in the park show that Aristotle contributed to the discovery of great achievements, with a decisive way.

Visit the Park with your children.

They will see, learn, will be happy.

The park is a wonderful outdoor museum, which offers knowledge, fun and entertainment!